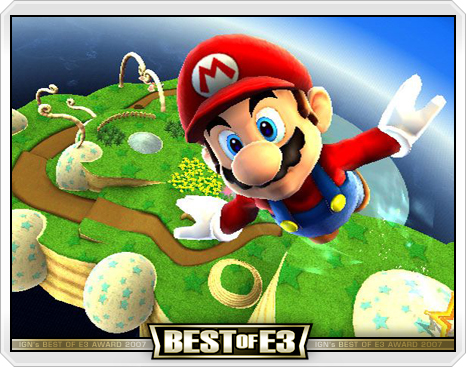 This year’s Best Adventure Game was an obvious choice for multiple reasons, as Capcom’s Zack & Wiki not only defines the genre for Wii, but was also the only worth competitor in the field. Still, should there have been a dozen adventure games for Wii at this E3 we’re positive Zack & Wiki would have come out on top, as the game lives, breathes, and is adventure.

Huh? Metroid purists will be crying foul, no doubt, but let us explain. Prime 3’s E3 2007 showing was heavy on gunning and light on the franchise’s traditional re-traversal puzzle-solving nature, and for the first time we’ve been forced to concede that Corruption is, technically, also a shooter. And what a shooter! Utilizing the accuracy and speed of the Wii remote, Retro Studios has delivered the most tightly-controlled first-person experience to grace any home console.

This wasn’t an incredibly big year for Wii fighting games, with three sequel fighters heading to the system in just a matter of months there’s still a decent amount of brawling to be had. Speaking of Brawl, Super Smash Bros. didn’t officially make the “Playable E3” roster, so Nintendo’s megaton fighter will have to wait until our end of the year awards to make a true impact.

Other Nominees: Naruto: Clash of the Ninja Revolution

We know what you’re thinking. “IGN, Rayman isn’t a music game. Have you guys gone off your rocker completely.” No, good sir, but we thank you for asking. Yes there were music games at E3 for Nintendo Wii, but with the top of the barrel being EA’s Boogie – a game we still can’t get into, as we can’t tell what on earth is going on – the award has gone to the Guitar Hero spoof that lies within Rayman Raving Rabbids 2. We had a chance to take an in-depth first look at this mode pre-E3, and the Wii-mote/nunchuk combo is a perfect mix of parody and entertainment which will again propel the Raving Rabbids franchise to Wii greatness.

Nintendo calls Super Mario Galaxy the first worthy successor to the now-classic Mario 64, and it’s easy to understand why. Like the pioneering N64 effort, Galaxy takes an old genre, the platformer, and makes it feel brand new again with a fresh spin on some tried-and-true play mechanics. This time around, Mario explores entire galaxies, jumping from planet to planet while battling recognizable enemies from the Mushroom Kingdom.

It’s still early in development, but with what EA has shown us so far Blocks is the real deal. Combining a newly-designed physics system for Wii with complex puzzles, co-operative and vs. modes, as well as user created content Blocks is looking to be the next big thing for casual, experimental gameplay on Wii. With just the Wii-mote in hand players can grab hold of in-level objects, throw items at the massive structures, or spring chain-reactions by use of over 20 different block types.

Out of all the awards this year, choosing Madden NFL 08 had to be one of the easiest. Sure Mario Strikers Charged is an amazing package as well, but with it being shown so many times previously, and now having the final version of the game in our office it didn’t seem “Best of E3” worthy. Madden, on the other hand, seems to have everything going for it. The gameplay is just as solid as last year, the new family play mode streamlines the already intuitive gesture system, the amount of mini-games seems to have no end, and from what we can tell the online system should be a great first step for EA’s Wii Wi-Fi escapade.

It was a tough move pulling this award from Super Mario Galaxy or Metroid Prime 3: Corruption, but in the end Best Artistic Design should truly go to a game that brings out style and individuality over pure graphics; after all, we’ve got an award for graphics. With the exception of a few titles – No More Heroes certainly comes to mind – Zack & Wiki: Quest for Barbaros’ Treasure has some of the best style and overall presentation we’ve seen on Wii thus far.

As far as graphics go, Super Mario Galaxy is a no-brainer, hands-down. Both Metroid Prime 3 and Zack & Wiki showed solid contention this year, but with Nintendo’s flagship title at the show it was really a moot effort for all other Wii games. Super Mario Galaxy pushes the Wii farther than any title we’ve seen thus far, blending a ton of lighting effects, shadowing, distortion, and reflection effects on top of a smooth, beautiful look.

Ah Rayman. You practically stole the show at last year’s E3 event, and nearly did it again this year with the simple joys of watching Rabbids scream their ever-loving heads off. We’ve had a chance to show you a half dozen mini-games or so thus far, but from what we’ve already seen Rayman Raving Rabbids is going to be its original design, fitting four-player multiplayer into every mini-game this time around, and adding even more outlandish scenarios to screw around in.

Usually we’d expect to give this award to a game that blows us away with amazing Wii innovation and tons of re-invented control schemes tailor-fitted for Nintendo’s new console, but in the case of Super Mario Galaxy that’s not exactly the case. Sure the game makes use of a few of the controller’s advantages, using IR for co-op and basic enemy targeting while a simple wiggle sends Mario spinning into action, but Super Mario Galaxy would have been awarded this game even if it used the Wii’s classic controller, as its about the pure excellence in level design and overall game concept that took this one home for Nintendo’s plumber.

Graphcially Super Mario Galaxy was the best of show, and as far as pure technological excellence goes the same applies. Not only did Super Mario Galaxy show off a ton of potential in the graphics department with distortion effects, bloom lighting, impressive fur shading, and slick overall character models, but it was also an achievement due to the crisp frame-rate and nearly perfect camera implemented into the game. Miyamoto made specific mention that part of choosing Galaxy’s mini-world design was to overcome many of the issues with 3D platformers – specifically camera control and disorientation – and it worked, as Galaxy has a truly cinematic feel throughout, changing camera movements on the fly when going from level to level, but still pulling in close enough to show off the game’s finer graphical points as well.

When Nintendo unveiled Wii Fit, it was over. Sitting in the front row of the conference we knew it, and watching at home everyone across the world knew it too. Wii Fit is entirely mainstream, and with the addition of the exercise-encouraging Wii Balance Board the game is sure to make headlines from now until its release. In addition, the potential of the Wii Balance Board is tremendous, as it allows the user to control Wii titles in a whole new way with full-body integration.

We didn’t have chance to go hands-on with the game, but EA’s early demo of Blocks instantly reminded us of Elebits due to its experimental nature and physics-based puzzles and gameplay. Blocks is all about putting you in a virtual world and enjoying the mayhem that comes with breaking up structures, throwing objects with the Wii-mote, and creating new worlds for yourself – or friends – to play in. Essentially blocks is a virtual playground where you can create and experiment with over 20 different block types and use them to create and solve puzzles or enjoy free-form multiplayer gameplay.

For one of the smallest E3 shows in history, Nintendo’s offering still had its fair share of surprises. Many hardcore gamers would argue that the most surprising – and rage-inducing – aspect of the show was the sheer lack of Smash Bros. Brawl. Others still were surprised to see a first showing of Trauma Center: New Blood for Wii, with co-op gameplay and new missions built specifically for Wii this time around.

Two E3 shows for Wii, and two Game of the Show awards for Super Mario Galaxy. This year our anticipation grew for games like Metroid 3 and Smash Bros. Brawl, but when we got to the show it was all about Super Mario Galaxy once again, as Nintendo’s flagship franchise wowed us at every turn. With six levels playable on the show floor (amassing about a half hour of gameplay) we managed to spend hours playing, as every inch of Galaxy brought about new level designs, new visual achievements, and new gameplay innovation. Miyamoto considers Super Mario Galaxy to be the true sequel to Super Mario 64 and we’d agree, as Galaxy combines pure platforming with amazing level design and truly solid control. Super Mario Galaxy proves that you can make something totally original on Wii without dumbing down the gameplay or being a slave to motion control, as it’s the perfect mix of IR, motion, and core character control.

Read the complete article over at IGN!