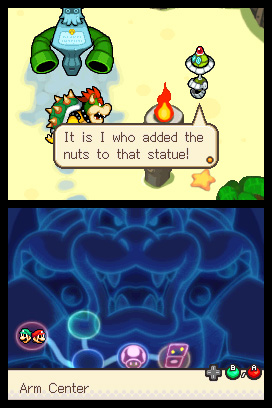 Who put those nuts on that statue?

A one player action role playing game; You control two story lines! Micro-sized Mario and Luigi must make it through a series of challenges inside Bowser by controlling him without his knowledge to find a way out! Meanwhile Bowser is fighting his own arch enemy to defend his castle. It’s up to Mario and Luigi to control Bowser, through a series of puzzles, from the inside and the outside to help him and themselves! Players are able to switch from story lines at will from the outside of Bowser to the inside of Bowser. With accurate timing YOU must help Bowser battle his arch enemy and work your way out of his insides! The more accurate you are the more advanced your characters get! But be careful because in some battles Bowser can grow so large that you may have to turn your DS sideways, blow in the microphone, or tap on the screen to keep up with the battle and control Bowser’s new gained powers!

Mario and Luigi Bowser’s Inside Story is jam packed with it’s usual witty dialogue and hilarious story line and can be consumed at amazon.

Wall Paper for your Enjoyment! 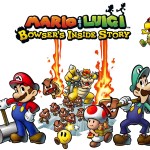