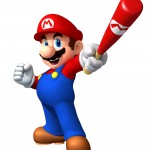 REDMOND, Wash., April 10, 2008 – The ongoing excitement over Nintendo’s groundbreaking Wii™ system gets a surprise springtime boost with the announcement of a new game. Kicking off its semiannual media summit in San Francisco near the company’s new sales and marketing offices in Redwood City, Calif., Nintendo of America today revealed plans for Mario Super Sluggers™ for Wii, giving baseball fans even more reason to root this season.

“Mario is truly a one-of-a-kind character; clearly fans can’t get enough of him and his friends,” said Cammie Dunaway, Nintendo of America’s executive vice president of Sales & Marketing. “We’re giving Wii users brilliant new ways to enjoy him while expanding our series of active-play games.”

In the same spirit as other sports-themed Mario™ games on Wii like Mario Strikers® Charged and Mario Kart® Wii, Mario Super Sluggers blends richly interactive baseball action with eccentric characters and elements from across the popular Mario universe. Players can swing the wireless Wii Remote™ just like a real bat or wave it toward the plate to deliver a masterful pitch, enjoying the same intuitive, easy-to-learn controls that helped make Wii Sports™ a living room hit. With Mario and his unpredictable pals filling out the roster, imagination and active-play innovation are sure to dominate the diamond in this lively title, scheduled for release later this year.