GoNintendo recently went hands on with Capcom’s latest Resident Evil for the Nintendo Wii. It is a kill and move on rails shooter and from what I’ve read it sounds like it wont be a bad game despite getting some bad impressions from people expecting a Resident Evil 4 clone for the Wii.

The demo level I played took place in a portion of Resident Evil 2. Basically, I was running around the alleyways and buildings of RE2. The setting was instantly familiar to fans of the series. For those that are unfamiliar with the gameplay, Iâ€™ll clear it up. RE:UC is a light-gun shooter that offers on-rails gameplay. You do not control character movement, you are drawn down a path once you defeat the enemies on screen. The screen moves you from location to loacation where you are supposed to take out all the enemies. Along the way there are items and weapons to pick up. Thatâ€™s pretty much the gist of how the game works. There were a few things that surprised me along the way though. 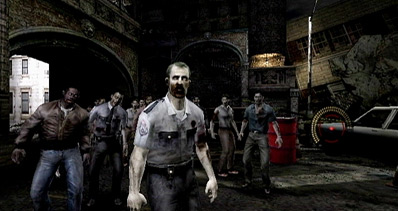