I am definitely curious as to how well this newfangled microphone will work for broadcasting an entire room full of rambunctious kids squealing and screeching while milking their cows and tending to their crops. 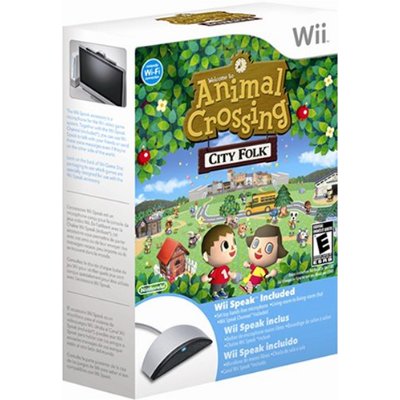 The new voice chat function makes use of the new Wii Speak accessory, a microphone that sits on top of the television and allows entire rooms of people to communicate with one another. Only users who have traded Friend Codes can connect with one another using Wii Speak. The accessory is sold separately at an MSRP of $29.99 and will also be available as a bundle with Animal Crossing: City Folk at select retailers at an MSRP of $69.99. The Wii Speak accessory comes with a code that lets users download the Wii Speak Channel from the Wii Shop Channel at no charge.

The Wii Speak Channel will allow friends and family members to chat with one another, whether they live across town or across the globe. When users are chatting with the Wii Speak Channel, they can see each other’s Mii™ characters representing them on the television screen.