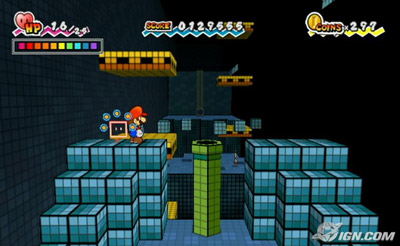 The staff over at IGN got to play hands on at the Game Developer Conference in San Francisco and have written their impressions on the game along with several screenshots.

Nintendo of America was on-hand at the Game Developers Conference 2007 with a handful of playable Wii titles, including the anticipated platformer/RPG Super Paper Mario. We took the gorgeously stylized sleeper for a spin and walked away completely dazzled. The title, which was originally planned for GameCube before it made the jump to Wii, is a sequel to the hit GCN game Paper Mario and bears many similarities to its predecessor. For one, it is brought to life with a quasi-2D style made possible with cardboard cut-out visuals. Mario is literally paper thin as he walks through colorful storyboarded environments complete with blocky clouds and skinny enemies. In addition, the title is neither a dedicated platformer nor RPG, but a combination of the two. That being said, in our experience Super Paper Mario leans closer to the former than the latter, as some of the turn-based battles of previous games have been thrown to the wind in favor or new real-time action. But the commonalities seem to end there because Super Paper Mario takes the 2D/3D relationship several steps farther and really baths itself in new and improved play mechanics, which are deeper and more engaging than ever before, even as it oozes enough style to satiate any desire for nostalgic presentation.