Nintendo has just released all new information on Mario Kart Wii along with photos of the Wii Wheel in all it’s glory! 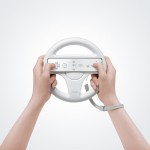 Apparently only three players can compete with each other at the same time on one console which I find kind of lame? What happened Nintendo? At least 12 racers will be able to race online though. Two local players can race vs 10 online players as well.

Progressing through the game is exactly the same as in all other Mario Kart games. Place 1st in all the courses in a circuit to continue on to harder circuits.

Confirmed characters are Mario, Luigi, Peach, Yoshi, Donkey Kong, Wario, Bowser and Toad. There are also a number of new characters that will be available.

Popping wheelies on Motorcycles will gain you a temporary boost. This is done by flicking the remote up. Also shaking the remote during mid air will give you an extra boost.