This new accessory combines the accuracy of the Wii Remote and Nunchuk in a single housing for a new experience for first-person shooters and targeting games. Players can hear the sounds of battle through the Wii Remote speaker when it is incorporated into the Wii Zapper. It arrives on store shelves later this year, packaged with Nintendo-developed software that shows off its versatility. The Wii Zapper also will be used with a host of third-party games, including Resident Evil: Umbrella Chronicles from Capcom, Ghost Squad from Sega and Medal of Honor from Electronic Arts. 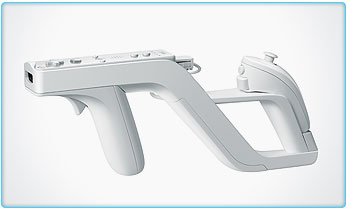