What do you think of the idea of Zelda playing along with Link? Will it open up a great new chapter in the Zelda series or will it just not be the same?

LINK AND ZELDA JOIN FORCES IN THE LEGEND OF ZELDA: SPIRIT TRACKS

REDMOND, Wash., Nov. 6, 2009 – It was among the most heinous incidents in video game history: In 1986, Princess Zelda™ was kidnapped from the land of Hyrule, setting off an intrepid rescue adventure for young hero Link™. Unfortunately for Zelda, this offense has been repeated more than a dozen times since, leaving her largely out of sight while Link traversed dark dungeons and confronted monstrous enemies alone in order to save her.

This time, in the new Nintendo DS™ and Nintendo DSi™ adventure The Legend of Zelda™: Spirit Tracks, that all changes.

For the first time in the 23-year history of The Legend of Zelda series, Princess Zelda is leaving the villainous clutches of the underworld behind and joining the adventure with Link. In The Legend of Zelda: Spirit Tracks, the spirit of Zelda accompanies Link on his quest to save Hyrule. Directly impacting game play like never before, Zelda’s spirit can take control of hulking suits of armor known as Phantoms, allowing the player to direct both Link and these new allies as they battle enemies, solve puzzles and uncover secrets. Zelda also rides alongside Link on his customizable train, offering wisdom that will help players find new areas, storylines and items. The team of Link and Zelda presents countless new storyline details for fans to enjoy, including a closer look at Princess Zelda herself, one of the most iconic video game characters of all-time. 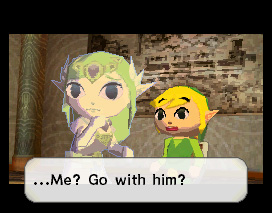 “More than two decades into its rich history, The Legend of Zelda has introduced another historic first for players as Link and Zelda unite to save Hyrule in The Legend of Zelda: Spirit Tracks,” said Cammie Dunaway, Nintendo of America’s executive vice president of Sales & Marketing. “Combining these unprecedented new story and game-play elements with the series’ innovative touch-screen interface on Nintendo DS and Nintendo DSi, the game is sure to surprise and delight new and longtime fans.”