Link’s Crossbow Training will be included with every Wii Zapper bringing archery fun to everyone! Shiguru Miyamoto recently mentioned that the reason he chose Link was that he didn’t want to over do using Mario because he has been featured in many spin-offs through the years. You can pick up the entire bundle for a mere $19.99 on Monday, November 19. 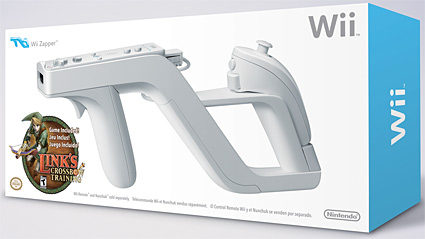 IGN Recently went hands on with Link’s Crossbow training and you can read some of their thoughts after the break.

At its recent Media Summit press gathering, Nintendo pulled back the curtain on the effort and even allowed those on-hand to play it. We wasted no time to give it a try and we can now officially confirm that it looks and plays exactly like you might expect it would. It’s Twilight Princess as a shooter. The game engine is clearly borrowed from director Eiji Aonuma’s recent adventure and the play mechanics remind us of titles like Resident Evil: Umbrella Chronicles and Ghost Squad, with a couple of exceptions.

Link’s Crossbow Training features three different gameplay styles, or modes, if you’d prefer. The first is a very basic shooter (called Target Shooting) set in the first-person viewpoint. You simply point, aim and fire with the Wii Zapper to blast away Bull’s-eye that pop up all over levels. Hitting the bull’s-eye in their center nets more points and you can even chain together combos if you successfully target multiple bull’s-eyes in succession. You’ll lose your combo if you accidentally miss. In later levels, the bull’s-eye will also move around the screen and you’ll need to be quicker on your feet to hit it.